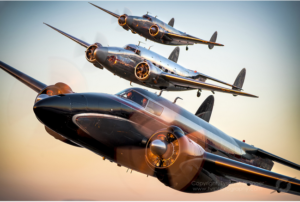 The Howard 250 was designed by Howard Aero to take the military designed transport Lockheed L-18 Lodestar and turn them into a executive corporate aircraft in the 1950’s.  With several modifications making the airplane faster, more comfortable and more fuel for longer flights, they turned the design into a serious performer along with stylish travel. Some of the noticeable changes are: passenger picture windows, new engine nacelle designs to decrease drag, changing the trailing edge of the wing, more streamline nose and pilot windshields, and a more aero dynamic tail cone.  Only 4 Howards were converted to the nose wheel design and this airplane is the only flyable example left.

Durrell Unger “Dee” Howard is a highly respected inventor for the aviation industry with over 40 patents issued. Shortly after being born in Los Angeles, Ca, his family moved to San Antonio, Tx and permanently made that his home.  After working as a airplane mechanic for various airlines, he started his business in 1947 at the age of 27 years old named Howard Aero, Inc. at the San Antonio Municipal Airport. His first major task was to modify a Lockheed Ventura, a medium bomber, into a high-performance long-range corporate aircraft that he named the Howard Super Ventura.  Shortly after its success, he moved to the Lockheed Lodestars and turned them into the Howard 250 and 350’s and developed the Howard 500. In the 1960’s Dee left Howard Aero and formed The Dee Howard Co. During this time, Dee and Bill Lear partnered up and developed the very first Lear Jet. During this time, Dee developed the first thrust reverser to replace emergency drag chutes along with many other developments and designs for business jets making them more efficient with better performance.  After his aviation career ended, he continued to use his engineering skills and focused on the automotive industry.  Dee focused on heavy road vehicles and made them safer to drive with better steering systems and more stable ride handling reducing fatigue.  Dee retired in 2006 due to health issues and passed away in February 2009.