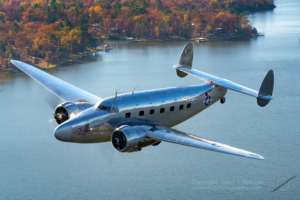 Sales of the 10–14 passenger Lockheed Model 14 Super Electra, which first flew in 1937, had proved disappointing, despite the aircraft’s excellent performance, as it was more expensive to operate than the larger Douglas DC-3, already in widespread use. In order to improve the type’s economics, Lockheed decided to stretch the aircraft’s fuselage by 5 feet 6 inches (1.68 m), allowing an extra two rows of seats to be fitted.

The prototype for the revised airliner, designated Model 18 by Lockheed, was converted from the fourth Model 14, one of a batch which had been returned to the manufacturer by Northwest Airlines after a series of crashes. The modified aircraft first flew in this form on September 21, 1939, another two prototypes being converted from Model 14s, with the first newly built Model 18 flying on February 2, 1940.

When the United States started to build up its military air strength in 1940–41, many American-operated Lodestars were impressed as the C-56. This was followed by the construction of many new-build Lodestars which were flown by the U.S. Army Air Forces as the C-60 and by the U.S. Navy and U.S. Marine Corps as the R5O. Lend-lease aircraft were used by the RNZAF as transports.