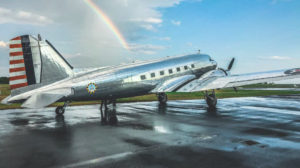 The history of the Douglas C-41 starts long before its creation in 1938. This plane has an extensive backstory that ties it heavily to major military and aviation figures at the forefront of aviation military history. This plane was the catalyst that pushed C-47’s to be the number one cargo and troop carrier of WWII. This unique and historic aircraft was commissioned by General Henry Arnold, and so we begin with his early exploits in aviation.

General Henry “Hap” Arnold was always at the forefront of military aviation. In 1911 the Wright Brothers trained Arnold. After only a few hours of flight training over the course of several days, he became the second person listed to have received a military aviation license alongside Tommy Milling.

The army then stationed Arnold at the first military airfield at College Park, Maryland, not far from the nation’s capital. There he trained others to fly for the military and worked closely with mechanics to help them learn fundamentals as well as nuances of maintaining aircraft. He established several records and received many awards for his aviation accomplishments.

It was during WWI that Arnold would see the potential for aviation as well as recognize the US military’s lack of power when it came to military aviation. Arnold was one of the few who believed in the military potential for aviation. His leadership would eventually lead to America’s aviation dominance during WWII. His experience in WWI convinced Arnold that future wars could be won in the air.

In 1917 Donald Douglas Sr., the first MIT graduate with an aeronautical degree, was appointed as the Chief Engineer of the Army Signal Corps. Douglas and Arnold worked side by side at the end of WWI to develop the relatively small Signal Corps. It was during this time that they developed a very close friendship that would last for decades to come.  In 1924, Arnold helped publicize the first US military, around the world flight, and aerial refueling exploits of the Douglas World Cruiser. This solidified the Douglas Aircraft’s reputation for reliable aircraft.

In the late ’30s, as Arnold saw the coming conflict in  Europe escalating, he began pushing for more and more development and military contracts with civilian companies. He was a strong proponent of the long-range bombers and fighters. In 1935 he was made Assistant Chief of Air Corps and was put in charge of procurement and supply. Arnold was dedicated to making sure that America did not fall behind in aviation as we had in WWI. It was during this time that Arnold saw the need for long-range cargo transport and troop carrier with reliability, speed, and durability. The Douglas DC-3 and its predecessor, the DC-2, were leaders in the field and had both shown amazing potential after only a short time on the market.

Douglas was also an advocate of the power of America’s Military aviation and saw the need for more America air power. Donald Douglas was not only a very highly regarded engineer and bold entrepreneur, but as World War II approached, he proved to be remarkably perceptive, by saying only a year and a half before Pearl Harbor, that this was the “hour of destiny for American aviation.” He expressed confidence that the industry could meet the need and laid out the methods by which it would transform, from small companies producing aircraft in small batches to making them on a production-line basis. The aircraft industry grew from a distant 41st place among American industries to first place in less than five years. Douglas Aircraft grew from being a small company with 68 employees in 1922 to be the fourth-largest business in the United States.

As WWII approached Douglas and Arnold could both see how aviation and air power would influence the coming conflict. Douglas and Arnold’s close relationship was no doubt a driving factor in Arnold’s commission of a military version of the DC-3. The capability of the DC-2 convinced Arnold of the excellence of the basic transport’s design and construction, and a study of the improved DC-3 enabled the US Army to outline the modifications required for the DC-3’s use as a military transport. These changes included more powerful engines, the strengthening of the rear fuselage and cabin floor, provision of large loading foods, replacement of the airline type interior with utility seats lining the cabin walls, and adoption of a power-plant comprising two R-1830-21 Radials.

This aircraft was used as a VIP Transport and based at Bolling Army Airfield, Washington D.C. as a part of the 1st Staff Squadron.  It was originally to be used by Arnolds predecessor Gen. Oscar Westover. Westover, however, died a month after the C-41’s delivery to the Army in a plane crash. After Westover passed, Arnold was promoted to Chief of the Air Corps and the C-41 was used as his personal transport.

Arnold used this plane to travel across the country to continue building up the power of our Air Corps. In 1941 Douglas and Arnold took the C-41 to a location for duck hunting. It was there on December 7th that Douglas and Arnold got the call about the attack on Pearl Harbor and rushed back to Washington D.C. It was this plane that made the Military’s use of the C-47 so prominent. It because of the close relationship Arnold had with Douglas that in 1943 that Arnold phone Douglas and tell him he needed an order of 300 C-47’s before July of 1944 “no questions asked”.

In September of 1944, Gen. “Hap” Arnold landed at LaGuardia Airport in the C-41 and had a meeting inside the plane on the runway with Dr. Theodore von Kármán. It was during this meeting that Kármán and Arnold discussed the formation of what would later become the Air Force Scientific Advisory Board. The goal of this group was to take the technologies that the Axis Forces had been working on and advise on projects for Research and Development. This meeting and the subsequent formation of this group lead to the development of jet engines, rockets, and many other advances in aviation technology.

The C-41 was not only a symbol of the relationship between Douglas Aircraft and the Army Air Corps during the war but it was also the driving force behind the heavy use of the C-47 during the war. As a result of the exemplary nature of the C-41, the C-47 was used heavily during the war and was one of the determining factors at play in the success of D-Day and Operation Overlord including many other major military operations.

After the war, it was sold to Southern Airways and registered as NC15473. Later to CAA as N12 and then to the FAA as N43. It then went on to South East Missouri State University as N54595, then to Otis Spunkmeyer Air as NC41HQ. James Gabbert operated the aircraft out of Oakland CA, and the aircraft is now owned by Mid America Flight Museum located in Mt. Pleasant Texas.

There is some confusion about this aircraft as there are publications that describe this aircraft to be one based off a Douglas DC-2.  The confusion came from the fact that this aircraft was ordered in the middle of a batch of DC-2/C-39’s. From this aircraft’s extensive background, there is no question this C-41 is most defiantly a variant of a DC-3 and not a DC-2.

In short, only one C-41 was ever built. It was the first Douglas DC-3 variant ever purchased by the US Government.