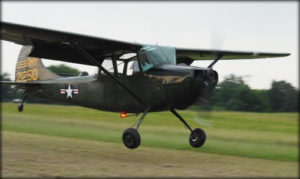 The U.S. Army was searching for an aircraft that could adjust artillery fire, as well as perform liaison duties, and preferably be constructed of all metal, as the fabric-covered liaison aircraft used during World War II (primarily Stinson and Piper products) had short service lives. The U.S. Army issued the specification for a two-seat liaison and observation monoplane, and the Cessna Aircraft Company submitted the Cessna Model 305A, a development of the Cessna 170. The Cessna 305A was a single-engine, lightweight, strut-braced, high-wing monoplane with a tail wheel landing gear. The greatest difference from the Cessna 170 was that the 305A had only two seats, in tandem configuration (the largest tandem-seat aircraft Cessna ever produced), with angled side windows to improve ground observation.