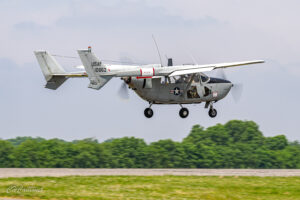 As with the civilian version, the Skymaster was a low-cost twin-engine piston-powered aircraft, with one engine in the nose of the aircraft and a second engine in the rear of the fuselage. The push-pull configuration meant a simpler single-engine operating procedure due to centerline thrust compared to the common low-wing mounting of most twin engine light planes, and also allowed for a high wing, providing clear observation below and behind the aircraft.

The first O-2 flew in January 1967 and the plane went into production shortly thereafter. Performance (especially at cruising altitudes) was degraded due to the added antennas and significant weight increase, but was considered sufficient for the anticipated low-level operation.
The Cessna O-2 Skymaster (nicknamed “Oscar Deuce”) is a military version of the Cessna 337 Super Skymaster, used for forward air control (FAC) and psychological operations (PSYOPS) by the US military between 1967 and 2010.

In 1966 the United States Air Force (USAF) commissioned Cessna to build a military variant to replace the O-1 Bird Dog and the O-2 resulted.