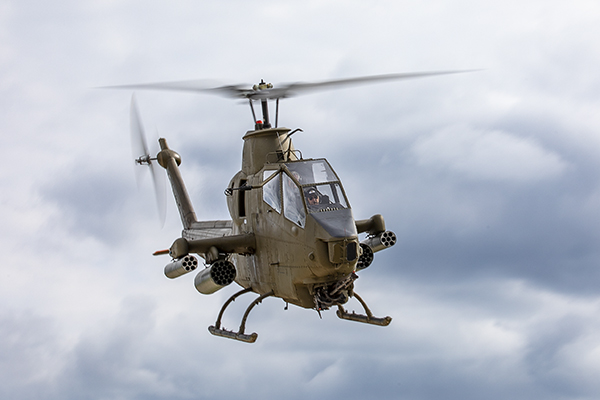 The Bell AH-1 Cobra is a single-engined attack helicopter developed and manufactured by the American rotorcraft manufacturer Bell Helicopter. A member of the prolific Huey family, the AH-1 is also referred to as the HueyCobra or Snake.

The AH-1 was developed using the engine, transmission and rotor system of the Bell UH-1 Iroquois, which had proven itself to be a capable platform during the Vietnam War. It was produced in response to fulfil a need for a dedicated armed escort for transport helicopters to give the latter greater survivability in contested environments. Accordingly, the AH-1 was a dedicated attack helicopter, featuring a tandem cockpit, stub wings for weapons, and a chin-mounted gun turret. The first examples of the type entered service with the United States Army during 1967; other branches of the US military also opted to acquire the type, particularly the United States Marine Corps, while export sales were made to numerous overseas countries, including Israel, Japan, and Turkey.

For several decades, the AH-1 formed the core of the US Army’s attack helicopter fleet, seeing combat in Vietnam, Grenada, Panama, and the Gulf War. In US Army service, the Cobra was progressively replaced by the newer and more capable Boeing AH-64 Apache during the 1990s, with the final examples being withdrawn during 2001. The Israeli Air Force (IAF) operated the Cobra most prolifically along its land border with Lebanon, using its fleet intensively during the 1982 Lebanon War. Turkish AH-1s have seen regular combat with Kurdish insurgents near Turkey’s southern borders. Upgraded versions of the Cobra have been developed, such as the twin engined AH-1 SeaCobra/SuperCobra and the experimental Bell 309 KingCobra. Furthermore, surplus AH-1 helicopters have been reused for other purposes, including civilian ones; numerous examples have been converted to perform aerial firefighting operations.