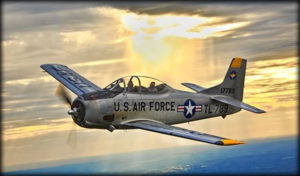 The North American Aviation T-28 Trojan is a piston-engined military trainer aircraft used by the United States Air Force and United States Navy beginning in the 1950s. Besides its use as a trainer, the T-28 was successfully employed as a counter-insurgency aircraft, primarily during the Vietnam War. It has continued in civilian use as an aerobatics and Warbird performer.On September 24, 1949, the XT-28 (company designation NA-159) was flown for the first time, designed to replace the T-6 Texan. The T-28A arrived at the Air Proving Ground, Eglin Air Force Base, Florida, in mid-June 1950, for suitability tests as an advanced trainer by the 3200th Fighter Test Squadron, with consideration given to its transition, instrument, and gunnery capabilities. Found satisfactory, a contract was issued and between 1950 and 1957, a total of 1,948 were built.

Following the T-28’s withdrawal from U.S. military service, a number were remanufactured by Hamilton Aircraft into two versions called the Nomair. The first refurbished machines, designated T-28R-1 were similar to the standard T-28s they were adapted from, and were supplied to the Brazilian Navy. Later, a more ambitious conversion was undertaken as the T-28R-2, which transformed the two-seat tandem aircraft into a five-seat cabin monoplane for general aviation use. Other civil conversions of ex-military T-28As were undertaken by PacAero as the Nomad Mark I and Nomad Mark II.