This Plane is ON LOAN to the Mid America Flight Museum 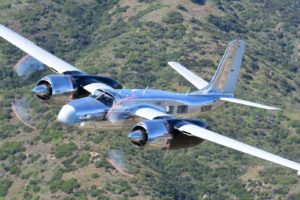 After WWII Douglas A-26 Invaders were sought after airframes for their speed. Dianna Converse Cyrus purchased Invader 44-34766 from surplus aircraft dealer Charles Babb for the purpose of racing and record setting. She raced NX67807 in the 1947 Bendix race as “Huntress.” The airplane was later sold and was converted to a high speed corporate transport. On Mark Engineering Company in Van Nuys, California converted A-26s to Marketeer and Marksman configuration. This aircraft became an On Mark Marketeer, N1243, and flew with the Superior Oil Company. In 1995 it was restored as a Marketeer and came to the Mid America Flight Museum in the Fall of 2019.