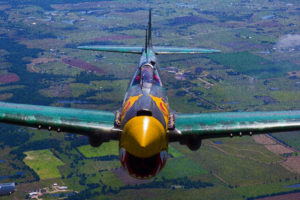 A total of 335 P-40K-10-CU Warhawks were manufactured. The USSR received 313 K models beginning in 1942. The Mid America Flight Museum’s P-40K Warhawk was provided to the Soviet Union under a Lend Lease program. It crashed after being shot down by Messerschmitt’s and was recovered for rebuild. The restoration was completed by Warhawks Inc. and it was painted in the scheme of the 343rd Fighter Group known as the Aleutian Tigers.”