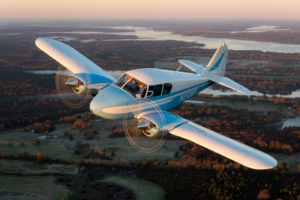 The Piper PA-23, named Apache and later Aztec, is a four-to-six-seat twin-engined light aircraft aimed at the general aviation market. The United States Navy and military forces in other countries also used it in small numbers. Originally designed in the 1950s by the Stinson Aircraft Company, Piper Aircraft manufactured the Apache and a more powerful version, the Aztec, in the United States from the 1950s to the 1980s.

The PA-23 was the first twin-engined Piper aircraft, and was developed from a proposed “Twin Stinson” design, inherited when Piper bought the Stinson Division of the Consolidated Vultee Aircraft Corporation.The prototype PA-23 was a four-seat low-wing all-metal monoplane with a twin tail, powered by two 125 hp Lycoming O-290-D piston engines; it first flew on 2 March 1952.The aircraft performed badly and it was redesigned with a single vertical stabilizer and an all-metal rear fuselage and more powerful 150 hp Lycoming O-320-A engines.