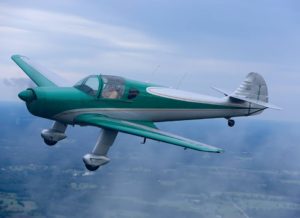 The Ryan SC (Sport Cabin) was an American three-seat cabin monoplane designed and built by Ryan; one was impressed into service with the United States Army Air Forces as the L-10.

The Ryan SC was a low-wing cantilever monoplane with a fixed tailwheel landing gear, designed to be an up-market version of the Ryan ST trainer. The prototype first flew in 1937, and had a nose-mounted 150 hp (112 kW) Menasco inline piston engine. Production aircraft were fitted with a 145 hp (108 kW) Warner Super Scarab radial engine. With the company’s involvement in producing trainer aircraft for the United States military, the SC was not seriously marketed, and only 12 production aircraft were built. One example was impressed into service with the United States Army Air Forces, and was designated the L-10. At the start of the 21st Century, four examples were still airworthy in the United States.

Two SCs exist with a horizontally opposed 6-cylinder Continental engines. One was modified from a radial powered SCW, and The Mid America Flight Museum’s SC one was built up with the 6-cylinder engine and was assembled after WWII using airframe parts from the original pre-WWII production run along with other custom pieces.