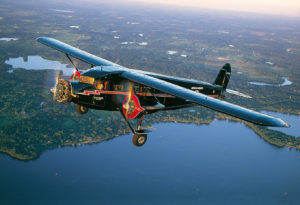 The Stinson SM-6000 Airliner was a 1930s three-engined (trimotor) ten-passenger airliner designed and built by the Stinson Aircraft Corporation. The SM-6000 was a high-wing braced monoplane with room for a pilot and a cabin for ten passengers. It was powered by three 215 hp (160 kW) Lycoming R-680 engines strut-mounted one each side above the main landing gear units and one in the nose. A number of variants were built mainly with improved interiors. In 1932 the Model U Airliner was produced which had low-set stub wings with an engine mounted at each wingtip.