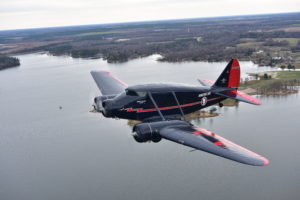 In 1933, the Stinson Aircraft Company produced the Stinson Model A, or Stinson 6000A Tri-motor, their last tri-motor airliner. It was a low-wing plane, designed as a feeder liner for American Airlines. The retractable gear hangs below the engines slightly, even when in the “Up” position, as pilots would sometimes forget to lower the undercarriage upon landing. This aircraft also has a restroom, which was a state-of the-art amenity for the time. The unique double tapered wing, combined with the stout steel tubed fuselage, is what gives this 6000-A its noteworthy appearance.

Thirty Stinson Model A aircraft were built prior to the end of produc-tion in 1936, but the success of the 6000-A was cut short due to the popularity of the Boeing 247 and Douglas DC-2. However, because of long waiting lists for these new aircraft, the airlines of Australia went ahead and ordered three more Stinson Model A aircraft. They rapidly proved useful, so a fourth and final A model was built and shipped to Sydney, Australia on December 14, 1936. Two Australian airlines, AOA and ANA, began cutting into each other’s profits. ANA attempted to obtain AOA, but this failed until AOA tragically lost half of its fleet. A merger occurred in 1937, but they kept their separate identities until July, 1 1942, at which point there were only two sur-viving Stinson 6000-A’s.

During World War II, parts for the Lycoming radial engine were hard to come by, so the engines were replaced with Pratt and Whitney Wasps. This gave the aircraft the ability to carry additional weight, along with enjoying higher cruising speeds. In 1945, one of the re-maining Model A’s came apart in mid-air during a regular flight, killing both crew members and all eight passengers. This left only one remaining Stinson Model A. This aircraft also crashed, in Alaska in 1947. It was rebuilt in 1979, and then in 1988, it was moved to Gregg Herrick’s Golden Wings Museum, located at the Anoka County – Blaine Airport, in Minnesota. Upon its arrival in Minnesota, the real restoration work began on the aircraft.

In 1968 Doug Lutz and three of his companions left their jobs at Glacier National Park in Montana to “seek fame and fortune in Alaska”. They got hired by the Bureau of Land Management as wildland firefighters and were soon put to work on a wildfire within sight of Mt. McKinley. They only had hand tools, since at the time the logistics of providing gasoline for chain saws in the remote tundra was difficult, Mr. Lutz said.

With 15 of his co-workers, he volunteered for an assignment to protect a very unique aircraft from an approaching wildfire. It was the last Stinson A Trimotor in existence at that time, NC15165, one of only 31 or 32 that were built. It crashed in 1947 and J. D. “Red” Berry had been trying off and on since 1964 to get it out of the tundra.

The following is an exerpt from the article Doug Lutz wrote in Disiples of Flight Magazine.…

“[On] August 11, a helicopter set our crew of sixteen men down near the Stinson Trimotor somewhere near the Toklat and Kantishna Rivers to prepare for the oncoming fire. We figured we had about 24 hours to dig a fire line down to permafrost, cut the existing trees down, drag them to the outside of the fire line, and back-burn the fuel before the fire hit. We worked feverishly to prepare for the onslaught, resting only when we dropped from exhaustion. I marveled at the very reason for our task, as the Stinson Trimotor, partially dismantled, was the most incredible air-craft I had ever seen. The interior appeared to be in excellent condition and with a little imagination, it was easy to imagine what a splendid ma-chine it was in its prime.

We thought we were pretty well prepared as the fire reached an old CAT a mile or two away that we were told had broken down trying to get the Stinson out sometime before. With a great explosion of the fuel drums, we knew our time was near. As the front hit us, the incredible heat, smoke, and wind generated by Z-83 (the BLM fire designation) defied comprehension and lies in my memory as the most vivid reminder of my insignifi-cance in the grand plan of things. As an 18-year old boy, the next few days would transform me into a man with a little greater appreciation for life.

The only thing we could do with the fire was to constantly walk around the fire line and put out any spot fires that may have jumped. The smoke was so intense that the only way one could breathe was to drop to the ground, put your face on the tundra, and breathe the air pockets. Visibility was nil and the heat incredible. Thank God for Visine! We ran out of food on about the third day, drinking water was nearly gone, and our radio to the outside broke down. We were later told that BLM headquarters had pretty much given us up for lost and were contemplating notifying next of kin. Needless to say, we survived, but it certainly was no picnic. I recall having a rousing game of poker inside the Stinson A, although just being alive was the biggest jackpot we could think of at the time.

A snapshot was taken on the fourth day, August 14, by one of the guys who sent me a small print later that fall. The most vivid picture, however, resides only in my mind as the helicopter raised up to take us home. The two acres or so within the fire line was resplendent green, and as far as you could see in every direction was starkly black. And the Stinson Trimotor sitting in the center of the green circle, looking so proud and incredi-bly alive, remains as one of the most significant and indelible images of my life…” 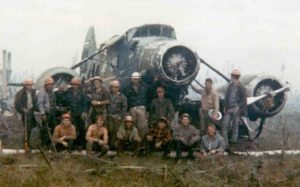 The first step was to builda jig in order to carefully construct the new air-frame with modern steel and welding techniques.

The airframe was laden with flaws in the metal: it was cracked and frac-tured because it was one of the first 4130 chrome moly tubing frames ever built, and they made the mistake of heat-treating it, which was the culprit of the brittleness. Along with that, the metallurgy was not up to standards. This was all found when Gregg Herrick suggested an x-ray of the frame. For safety’s sake, they opted to fabricate the major portion from scratch. They proceeded by making a jig and combining modern steel with modern welding techniques to construct the structurally sound frame that it has today.

The sheet metal encompassing the aircraft was in rough shape, as were the engine nacelles, all of which had to be pounded out by hand and rolled on an English wheel.

Of the entire aircraft, the wings were one of the few salvageable parts. Upon completion of the airframe construction, the wings and fuselage were covered with new fabric. The entire airframe was covered, along with the wings. Fabric work is a process involving gluing the fabric on, shrinking it, and rib stitching and reinforcing where necessary.

The interior was shot; there was not much worth saving. The seat frames were reupholstered, and along with that, new flooring, walls and ceiling were installed. After the fabric is glued, ironed and UV treated, it is then ready for primer and paint. As you can imagine, on an aircraft this large, it is a somewhat challenging task to paint. The plane was painted to rep-licate the original American Airlines colors and scheme that it had the day this Stinson Model A left the factory.

All three radial Lycoming engines were re-built, and the Hamilton Stan-dard props were overhauled to factory specs.

Years after this extensive restoration, The Mid America Flight Museum purchased the plane and are now flying and maintining it regularly.