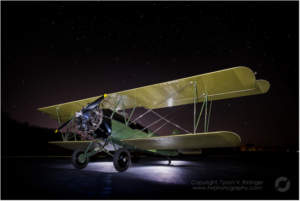 The Travel Air 2000/3000/4000 (originally, the Model A, Model B and Model BH and later marketed as a Curtiss-Wright product under the names CW-14, Speedwing, Sportsman and Osprey), were open-cockpit biplane aircraft produced in the United States in the late 1920s by the Travel Air Manufacturing Company. During the period from 1924–1929, Travel Air produced more aircraft than any other American manufacturer, including over 1,000 biplanes (some estimates range from 1,200 to nearly 2,000).

Travel Air biplanes were widely used in 1920s/1930s war movies, particularly to represent the airplanes they were patterned after: Germany’s Fokker D-VII fighter, the top fighter of World War I. In the motion picture industry, they were known as “Wichita Fokkers.” In fact, Hollywood’s demand for Travel Air biplanes was so intense that Travel Air’s California salesman, Fred Hoyt, coaxed Travel Air co-founder and principal airplane designer, Lloyd Stearman, to come to Venice, California in 1926 to exploit the movie industry demand for his aircraft by starting a short-lived independent Stearman Aircraft Company (re-opened back in Wichita in 1927).

Some of the many movies using Travel Air biplanes (2000 and 4000, in particular) included: