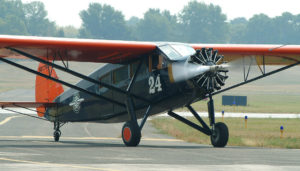 The Travel Air 6000 (later known as the Curtiss-Wright 6B when Travel Air was purchased by Curtiss-Wright) was a six-seat utility aircraft manufactured in the United States in the late 1920s.

It was developed as a luxury version of the Travel Air 5000 marketed principally as an executive aircraft, although its size proved popular with regional airlines, which purchased most of the roughly 150 machines built.

The 6000 was a high-wing braced monoplane with a fuselage constructed of steel tube and covered in fabric. In keeping with its intended luxury market, the fully enclosed cabin was insulated and soundproofed, and included wind-down windows. The basic model was priced at $12,000, but numerous options were offered that could nearly double that price; actor Wallace Beery’s aircraft cost him $20,000 and was the most expensive Model 6000 built.