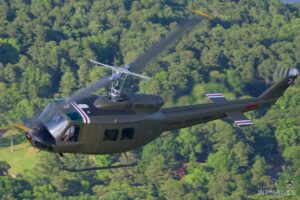 The Bell UH-1 Iroquois (nicknamed “Huey“) is a utility military helicopter powered by a single turboshaft engine, with two-bladed main and tail rotors. The first member of the prolific Huey family, it was developed by Bell Helicopter to meet a 1952 US Army requirement for a medical evacuation and utility helicopter, and first flew in 1956. The UH-1 was the first turbine-powered helicopter produced for the United States military, and more than 16,000 have been built since 1960.

The Iroquois was originally designated HU-1, hence the Huey nickname, which has remained in common use, despite the official redesignation to UH-1 in 1962. The UH-1 first saw service in combat operations during the Vietnam War, with around 7,000 helicopters deployed.

MAFM’s Huey played a unique role in the history of our great country. It arrived in Vietnam, to D Troop, 3rd and 5th Cav US Army in February of 1970. This aircraft was not only used for “Lift Missions” but also, for “Command and Control”. With a .50 caliber machine-gun on her left side and an M-60 machine gun on her right side, she was a force to be reckoned with. When she wasn’t carrying our great soldiers to victory, she was helping carry the wounded to safety. This brave aircraft and her crew assisted in medical evacuation missions to rescue our wounded troops from the battlefield during the Vietnam War. This was one of only two H models that flew “C&C” for D Troop at the time. Over the course of 8 months this aircraft accumulated over 2000 combat flight hours. In September of 1970 it took and RPG hit to the tail rotor and was rotated out of service.

It was our unique privilege to fly our Huey’s two captains and only Crew Chief on several, once in a lifetime flights over the Titus County landscape. In talking to these veterans who so bravely risked their lives for this country we learned much of the unique history pertaining to this aircraft. It was an absolute honor to fly with these men and be able to record their stories. Please view the video above to watch this incredible set of interview’s with John Sorensen, Tom Egleston, and David Riley hosted by Bruce Heffner and Scott Glover!

For more information about the Huey’s crew and her only Crew Chief (David Riley) click the link to read an article written by Wayne Minor, who compiled much of the information you see here.