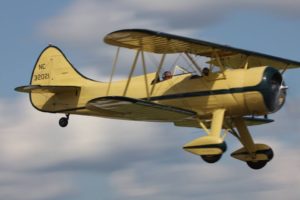 The 1934 model YMF was substantially redesigned with a longer and wider fuselage, larger rudder and other structural changes, and put into production in March 1986 by WACO Classic Aircraft of Lansing, Michigan as the YMF-5. Over 100 YMF-5s were completed as of 2012 with new examples being built to specific orders. The WACO Aircraft Company of Ohio Inc had built three replicas by December 2011, which they designated MF.