An Aviation Enthusiast of a Different Flavor

An Aviation Enthusiast of a Different Flavor 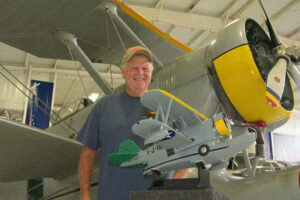 Hundred degree days do little to give us the first hint of fall but he has not lost sight of the fact that another Titus County Fair is drawing near and is practically around the corner. His art and craft entries have taken blue ribbons many times before but each year is different and who knows what will be entered? Does he even know what his own entry will be this year?

Nathan Nash is a master craftsman and although his interests in recreating real life through his art, his subjects are varied. Time and again, he finds himself drawn back to aviation in one form or another. “I loved airplanes as a little kid,” said Nash. His father had been a building contractor, so taking dominion over planks of wood and transforming them into something useful, aesthetically pleasing, or both were probably in Nathan’s DNA. His father had been a carpenter who would take on every aspect of building a home save things such as electrical wiring, which would be subbed out. From the door trim to the on-site building of cabinets, he did it all. “My dad would say ‘build things better for the customer than you would for yourself.’” said Nash.

Nash had been a native of the Titus and Morris County area and attended school at Paul Pewit ISD near Omaha, TX where he graduated.  After high school, Nash landed a scholarship in Football and Track and attended the Ouachita Baptist University in Arkadelphia, AR. It was not too long there though, that Nash suffered a knee injury that cut short his football pursuit for the time. He later returned to Texas where he obtained his degree at East Texas State in Commerce, TX with a double major in History and Industrial Technology. The latter included training in drafting which Nash admits, contributed to his current endeavors in turning ideas into reality at least when it comes to forming model aircraft reproductions. 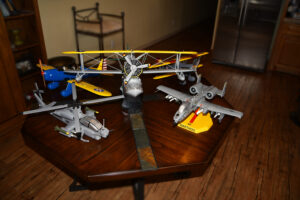 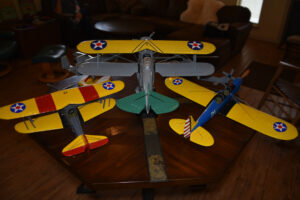 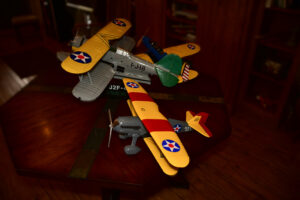 After college Nash had become a career educator for Mount Pleasant ISD retiring after 37 years. For the first eight years, Nash had been a coach. I asked Nash if moving away from coaching, focusing on other things had been less stressful and Nash replied: “It was a lot fewer hours than coaching.” With more hours freed up, this was probably a chance for Nash’s creative side to blossom. As a youth, Nash had put together quite a few plastic models sold by companies like Revell™, Monogram™, and, Aurora™.  Nash said he had always loved the P-40 Warhawk and his first model was a P-40 from a kit with a color scheme fashioned after the famous Flying Tigers. Nash said he was about 6 or 7 years old at the time and he did not think it came out so well. Nash was born in 1953 and his first car was a 1957 Chevy, perhaps giving him an early eye for classic designs. For that generation, it was almost obligatory that young boys try their hand at model airplane building from kits that could be purchased at local variety stores. Over time, Nash would build things such as train sets, etc. He said it was about 30 years ago, he had waded off into woodworking projects. He said he once built a couple of “rockers” that was fashioned in the form of an airplane and a railroad locomotive.

Nash’s most recent claim to fame was a reproduction of the Mid America Flight Museum’s Grumman J2F-4 “Duck.” It was only fitting that my interview of Nash was taking place practically under the nose of the venerable WWII aircraft. In a side room to one of the hangars, we assembled a few examples of Nash’s wood carvings. Before we delved into a deep conversation regarding his craft, the recent work of art, the J2F-4 Duck was placed in

the center of a table. Others were added, such as a Curtiss Sparrow Hawk biplane, a Ryan PT-19, and A10 Warthog, and an Apache Helicopter. Nash told of once having some neighbors when he was young, who had built an RC airplane that was a PT19 with about a five-foot wingspan. He said since seeing that airplane at an early age, it had always been one of his favorites.  Nash said he picked his new projects mostly out of finding an aircraft that appealed to him or when he discovered something new, that he had not considered building before. So it was with the Grumman Duck. Nash had never seen or considered the Duck before first seeing it at the museum.

Having worked around the museum from well before and beyond the arrival of the museum’s Grumman Duck, it occurred to me, that I had never seen Nash out there, pulling a tape measure around or closely measuring in the aircraft. I inquired how he approached a new build of say, an aircraft. “Oddly enough, I have a knack for proportions,” said Nash. He said his models were not necessarily built exactly to scale.  Nash said he worked mostly from photographs found on the internet and he would try to locate as many angles or views as he could to help guide him. “I normally start with a side profile” when I start laying out a project, Nash said. 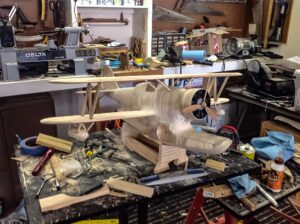 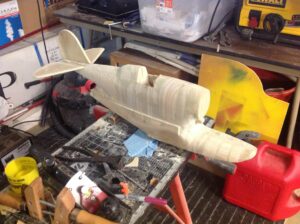 Nash works mostly with Poplar planks of various sizes and laminates them into blocks of sufficient size from which he forms his final products.  The models assembled for the interview that morning were generally about a two feet in length or width. Nash could no doubt build to any size he preferred, however, a few years back, he had divested the burden of a home with a dedicated shop building, and acreage to boot, for a more downsized option.  Nash said while maintaining the larger place had once been fun, it had become a bit of a burden in later years and he had decided to simplify things a bit. Nowadays, he resides in a nice quiet subdivision and works inside his garage which somewhat limits the size of his planned projects. Although we did not discuss it, if the finished projects were too large, it would be impractical to put them on display at the county fair. Nash consistently enters models at the county fair and always wins blue ribbons for them.

As I moved around the room taking a few photographs of the models, I was starkly impressed at the accuracy of color reproductions. I asked Nash if he found he had been able to use stock colors and for the most part he said he had. He said that for the aircraft though, he had to warm the tint of the yellows up a bit to get them right. Stock yellows that he had found did not look right, said Nash. Near the end of the interview, we stepped over to the real-life Grumman Duck and took a few shots of Nash with both of the “Ducks” in the shot.

After Nash’s ribbon winning showing at the 2019 Titus County Fair, Nash offered to donate his Grumman Duck to the Mid America Flight Museum and his gracious gift was accepted.  At present, this outstanding reproduction of the Grumman Duck will be on display and can be seen at that museum during normal hours of operation. The staff and volunteers of Mid America Flight Museum truly appreciate the gift by Nathan Nash and we are honored to have his Grumman Duck” among our fleet. Nash is genuinely humble regarding his talent but I was so excited when I approached him regarding the interview. Mid America Flight Museum so appreciates Nathan for taking the time to sit down with us, sharing his insights into his passions for history, aviation, and woodworking as they all converge with his finished works of art. Being fans of Nash’s artwork, it is with zeal, we look forward to seeing his future projects. 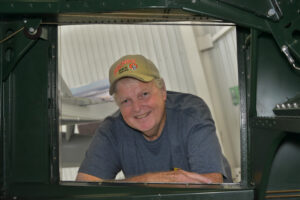