Welcome to the World of an Air Saw Pilot

Welcome to the World of an Air Saw Pilot 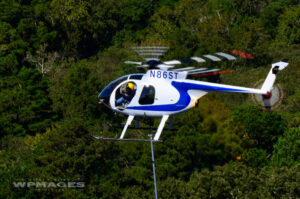 It was early on a September morning three years ago when we at Mid America Flight Museum discovered and thankfully, got to know helicopter pilot Dan Miller. I had driven through the country side with my camera and had caught a glimpse of the operation from a distance. I pulled over in a shaded hollow where I could see the power line right of way at the brow of the hill. Hearing the apparatus was like waiting for an approaching pterodactyl.

It wasn’t long before I saw a slick MD-500 helicopter with its hundred foot boom extended below connected a buzz saw of mammoth proportions. The saw was about 30 feet long with ten 24” circular blades spinning and making quick work of tree limbs encroaching into the right of way threatening the precious electrical power lines. 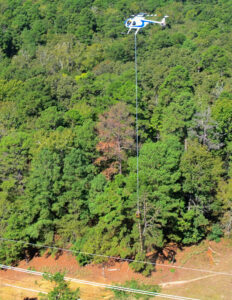 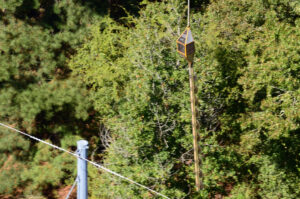 After a minute or two’s duration of straight precision cutting with the saw, the pilot would move the saw to another location. The movements were choreographed smoothly in the way an old fisherman could negotiate a cane pole with a long line to his bait, dropping it accurately into a small opening behind a rift in a river or slough. The saw would again become steady and resume its mission of trimming the trees at the edge of the right of way.

I took a moment to find a ground crew worker and inquired as to what was a safe distance to photograph the activity and one told me it was safe to hang out where he and I were at. After the helicopter pulled up stakes on one side of the road, the pilot lifted the giant saw well over the power lines and began to work on the other side of the road. I climbed up on to some hay bales stored along the fence to get a few more shots before he continued down the right of way.

I took a photo with my cell phone and sent an image to an aviation pilot friend who responded “I hope he knows Jesus.” “He doesn’t have many options if something goes wrong” my friend said. Well it would turn out that the pilot and Jesus were quite close to one another, I learned later that evening. When the air saw crew visited the local airport, they encountered a couple of guys from Mid America Flight Museum who came out to greet them.

It was that evening that some of the museum team and I were able to get to know Dan Miller. Dan proved to be someone you could instantly and easily like. From that point, he quickly became fast friends to most of the museum staff and volunteers. He flew for a company based out of North Carolina named “Aerial Solutions” and his specialty was clearing power line right of ways with a saw, referred to as “air saw,” suspended from a helicopter.
Without question, Dan Miller had one of the more unique jobs most of us had seen before. It was clear to us, that what he did day in day out, takes superior airmanship and hand eye coordination. It’s also not for the faint of heart but we did learn that he has a release on the rig so that in an emergency, he could quickly release the giant saw from his helicopter. Dan discovered the warm hospitality of the MAFM group and everyone that met him, loved the guy. A few days ago, Dan and his crew returned to our neck of the woods where he agreed to lunch and a short interview.

Dan Miller is a native North Carolinian from Thomasville, a town known for making fine furnishings under the name “Thomasville.” He said his father had been a private pilot however; he wasn’t active after Dan was born nor while Dan was growing up. As a youth, Dan said he toyed with the idea of aviation and there had been an airfield close to where he had grown up. He said the hangars weren’t much to look at, basically open sided sheds to park aircraft under and there was a dirt landing strip. He said he recalled going out there as kid to look at the airplanes and wondered what it was like to fly.

There had been a fellow student from his school named Joe Smith who was seven or eight years Dan’s senior. It was Smith who became a mentor to Dan, helping to instill the desire to fly. He finally got the chance to fly with Smith in an Aeronca Champ. Dan chuckled as he explained that his former mentor Joe Smith had recently joined Aerial Solutions, the company Dan flies for now. If things work out said Dan, he will be the one providing field training for his former mentor Joe Smith. He will be sort of mentoring his mentor, so to speak.

Back to his own introduction into aviation, Dan said he received his fixed wing license at 17 years of age although it was not too long, that he allowed flying to go by the wayside as he pursued other activities. Then in 2004 he had for a reason he could not clearly remember, attended a meeting of the local airport board where he lived. He said he had by chance walked from the meeting along with a man who owned a Brantly B2B helicopter and he told him it had been sitting in his barn for a while as he had not had much of chance to fool with it. He suggested that Dan use it to get his helicopter license and build hours, getting his instructors license.

He said while he was still a fairly low time helicopter pilot, he had landed one day in nearby Mt. Vernon, NC where he had a chance encounter with Cleve Cox who told him something to the effect of his company cut trees with helicopters and Dan thought that sounded like an interesting job. It was not long afterward that Dan met Cleve’s father William Cox, the founder of Aerial Solutions. Dan was soon hired to work as a ground crewman for the company until a pilot position came open in the company with Dan soon becoming a pilot for Aerial Solutions.

We talked a bit about how the machine (the saw) operated and he told me the saw has a “souped up” twenty something horsepower Kholer 4 stroke engine that is probably putting out something like thirty horsepower after modifications. The saw’s engine powers ten 24” circular cutting blades via a series of interlocking belts. “The saw is strictly operated wirelessly” Dan said. The pilot can start the engine and when desired, engage the saw, all with a couple of pushes of a button. The section of the saw with the circular blades measures about 20 feet in length and with the power unit, the entire saw measures about 30 feet long. The saw is operated while suspended from a one hundred foot long rigid aluminum stem which is connected to the helicopter via a clevis so that the pilot can release the load in an emergency. Dan said he had twice had to release the saw due to it having become bound up in the wood it was cutting.

Any greenhorn pilot who has had the chance to take the cyclic and try to hold a helicopter in a hover can understand the complex intuitive skills required just to operate the aircraft along with other elements of flying and communicating were appropriate. Add to that, a 30 foot long weight acting as a pendulum on the end of a 100 foot long pole, connected to the bottom of your helicopter. There is incredible lag time from the moment when the helicopter moves and when the saw follows suit. Hand in hand, to stop the swing of the saw, the helicopter must check the movement ahead of time in a preemptive fashion. There are several axes that are being dealt with by the pilot. On top of the three dimensional movement of the dangling saw, there is some orbital rotation of the saw about its vertical axis that must be accounted for. “The saw is mounted on a rigid stem, but there is some rotation” Dan said.

Click on the following video Link to see how things look from below. Video Courtesy of Dan Miller

I believe Dan used the term “dream job” once during the interview but it is certainly a mentally and physically taxing job on the pilots as well as his ground crew. Dan said a target goal was to operate for 5 hours. There might be reasons that they can only work less than that but then again, some days are quite a bit longer said Dan. Dan said he had encountered EMS helicopter pilot applicant’s who might have had an average of 200 hours in a year of flying. He said, he said sometimes, he gets in 150 hours of flying in a 28 day period. Dan said he had seen pilots with thousands of hours of “long line” experience with helicopters; struggle to learn to operate the big saws used by Aerial Solutions.

Click on the following video link to see how things look from above.  Video Courtesy of Dan Miller

Watching one of Aerial Solutions crews trim a woolly power line right of way for a little bit, it becomes clear how much more efficient the aerial method of trimming the right of ways is. The advantages would become quite stark on very steep terrain or say, in swampy conditions.

Aerial Solutions provides tree trimming services across the nation and at any given time, has 9 working helicopters and the company has an additional spare helicopter. Each helicopter has two pilots assigned to it along with a ground support crew.

We might fail to notice long uninterrupted periods of continuous electrical power service but were it not for guys like Dan Miller and others who keep the power line right of ways clear of encroaching trees, we would most certainly notice when the power is interrupted. The fruit of Miller’s work likely goes unnoticed by the end customers, but rest assured, we all benefit from it.

So the next time you see an aerial trimming job going on in the distance, if you can find a safe vantage point, a safe distance away, maybe a quarter or half mile away, take a moment to watch the artful ballet of man and machine as pilots like Dan Miller thread the gap between standing trees and very high voltage electrical lines. With only a few minutes of watching the operation, we think you will develop an appreciation for the very unique work Dan Miller and Aerial Solutions performs. 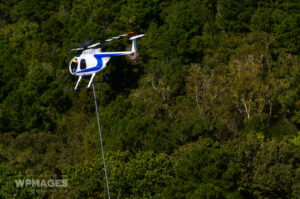