Something Not Seen Every Day

Home/Uncategorized/Something Not Seen Every Day
Previous Next

Something Not Seen Every Day 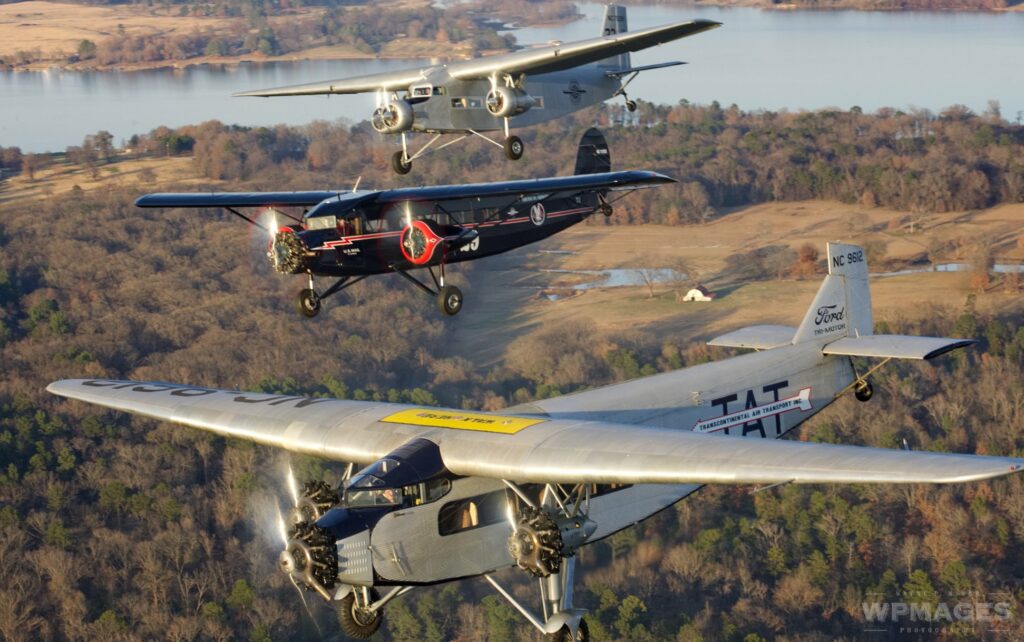 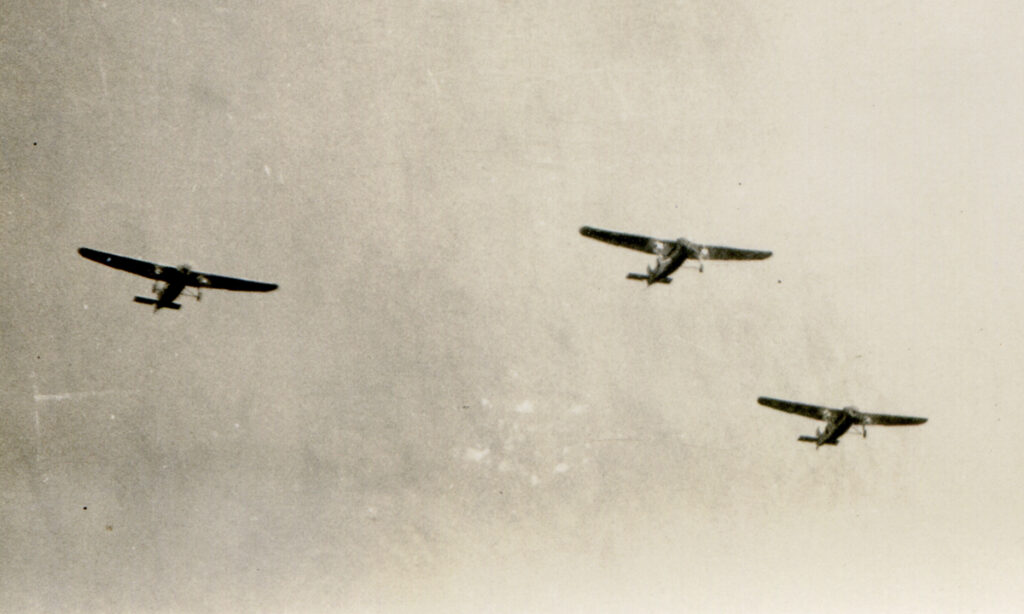 Probably doing anything else, the tug of dual cameras around my neck might have been annoying, but they were of little or no discomfort slipping along through the air  over and around Lake Bob Sandlin. We had the door off the helicopter and I was comfortably secured being belted in and with a safety harness. The view of the countryside around Lake Bob Sandlin was simply breathtaking. With only a thin bulkhead separating my shoulders from the whirling turbine engine and transmission system, the mechanical sounds were muted a good deal by the headset I was wearing. By no means, an adrenaline junkie, I am however; among those who enjoy each moment of life. The kind of fun we were having that day, would give anyone a bit of a rush.

Essentially having frisked the numerous pockets of my shirt and pants, I had double checked that there was nothing inside them that could get away in the slipstream of the helicopter. The cabin was checked for anything loose or that could be dislodged. We didn’t want anything to have the potential of escaping and getting into the tail rotor. Leaving nothing to chance, I had even re-tightened the laces of my hiking boots. The wind would soon be vigorously tugging at them. In no time, we were aloft and on our way. I have always found it surreal spending time in the air over a place where I spent so much of my life in years past.

During the few slack moments, I gazed downward over the legs of my utility pants billowing from the intensity of the more than 100 MPH airspeed coupled with the main rotor wash. Seeking the most comfortable position for my legs, I found I barely had the strength to either cross or uncross my feet which were not quite resting on the step below the floor of the cabin. 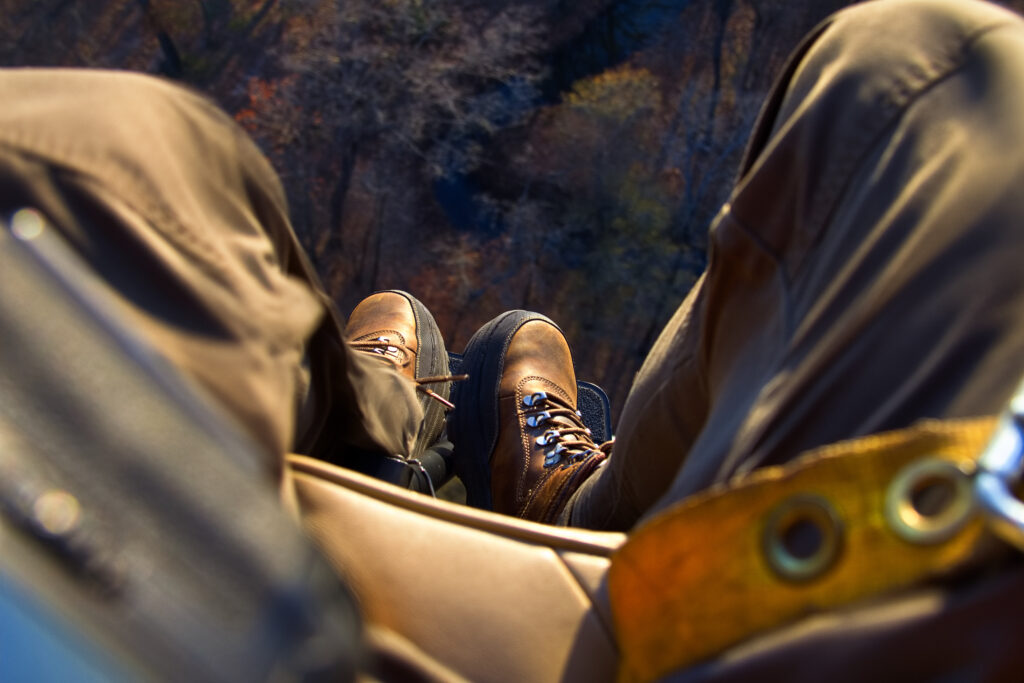 From the lofty perch, our view of the surrounding lake country was quite spectacular in and of itself, but it was only part of our affection at that moment. We were an eclectic group bonded through a mutual love of aviation and we were specifically bonded by a love of vintage historic aircraft.

Our pilots that day were all seasoned professional pilots with a lot of time under their belt and adept at what is known as “formation flying.” The singularity of the moment was not diminished by the fact that it was happening on December 7th.  The goal was to arrange a gaggle of extremely rare vintage aircraft into a formation. Unlike their modern counterparts, precision maneuvers in vintage era transport aircraft are a bit of a challenge but our pilots were up to the task. Each of them was truly skilled and would probably coax as much precision as anyone could have out of these old rumbling stalwarts. The experience of these pilots added a several levels of comfort as my feet dangled outside the helicopter.  All told, the three vintage aircraft flying in formation that evening had accumulated about 230 years of flight experience. Let that number soak in a minute. 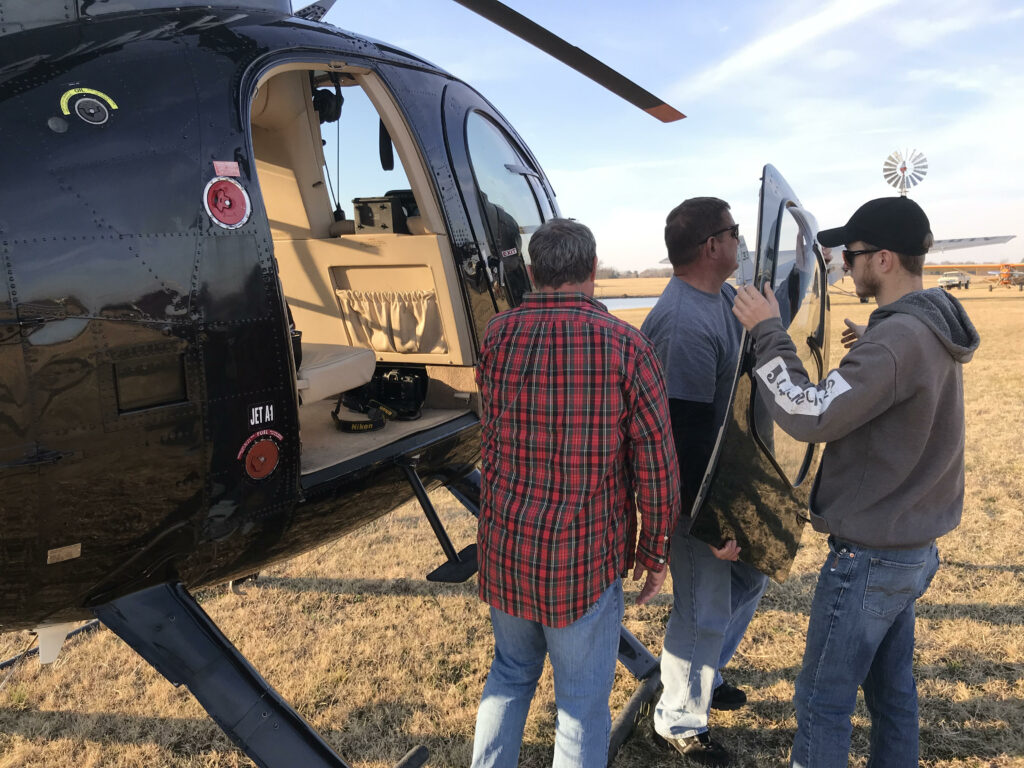 Scott Glover, Brian and Bryan Miklos, removing the door to the MD-500.

Scott Glover was at the controls of the MD-500 helicopter which served as the photo ship. Bryan Miklos, a mechanic for Mid America Flight Museum, was seated in the right seat. At the time, Bryan was still a student pilot who had recently soloed.  His dad, Brian Miklos was in one of the aircraft we were photographing, making the moment all the more special. The weather was cool and we were well under gross weight in the helicopter, so the 500 was well up to the task of keeping up with the fixed wings we were shooting. 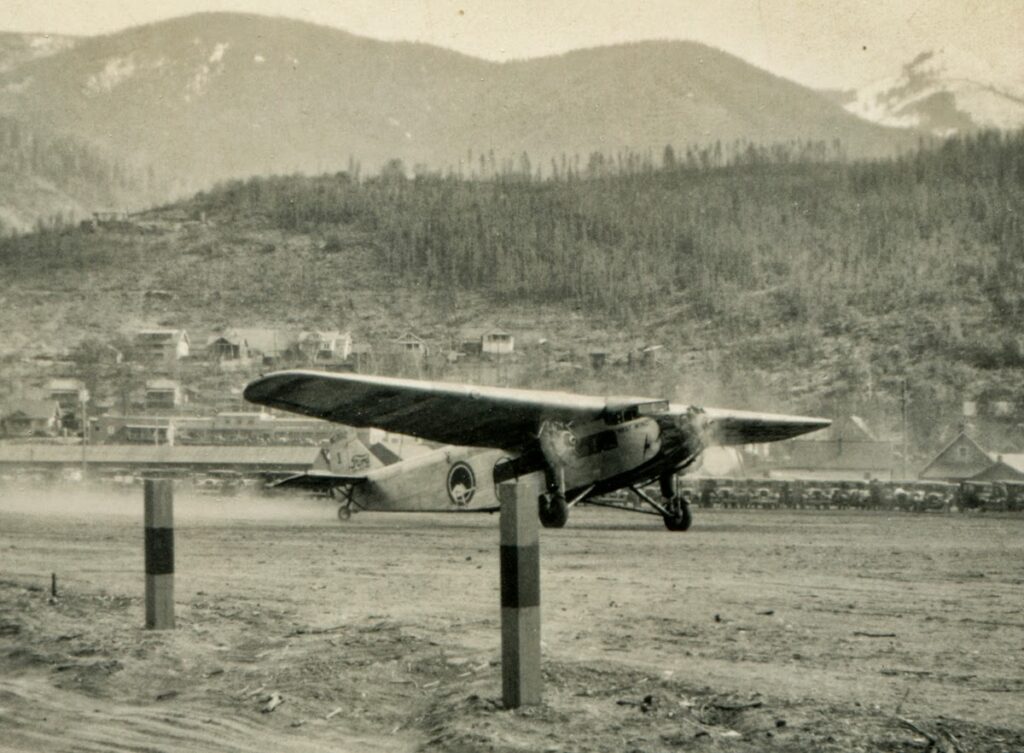 The nearest aircraft was the Mid America Flight Museum’s Ford 4AT-E Trimotor powered by three Wright Whirlwind radial engines, Built in 1929, it was the 55th of the 199 Ford Trimotors  ever made. Less than a handful of Ford Trimotors remain flyable today and there are only another very small handful that are being restored (hopefully) to flight condition. When new, the Ford (NC 9612) AKA “The West Wind II” was first purchased by World War I Aviator Nick Mamer, owner of Mamer Air Transport and Mamer Flying Service out of Spokane Washington. 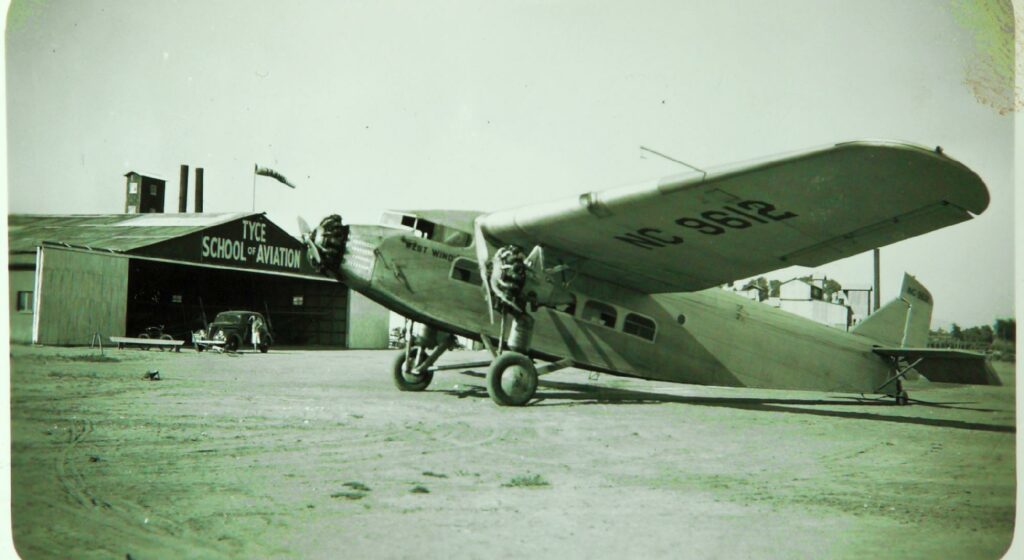 NC9612 on Ramp at Tyce Aviation

Twelve years later, the Ford was present on the Island of Oahu the morning Japan attacked Pearl Harbor. NC9612 was owned and operated at the time by K.T. Flying Service. Owners Knox  (as in Knox Gelatin) and Bob Tyce used the aircraft to hop freight and people about the islands of Hawaii. On the morning of the attack, Tyce had been giving flight instruction but managed to safely land with his student while two of his students (U.S. Servicemen) in other aircrafts, were shot down. Tyce was killed by Japanese strafing as he walked toward the hangar dying in his wife’s arms who managed to get out to him. It’s believed that Tyce was the first known, civilian casualty in Japan’s Attack on Pearl Harbor and the two student pilots were the first two military casualties. 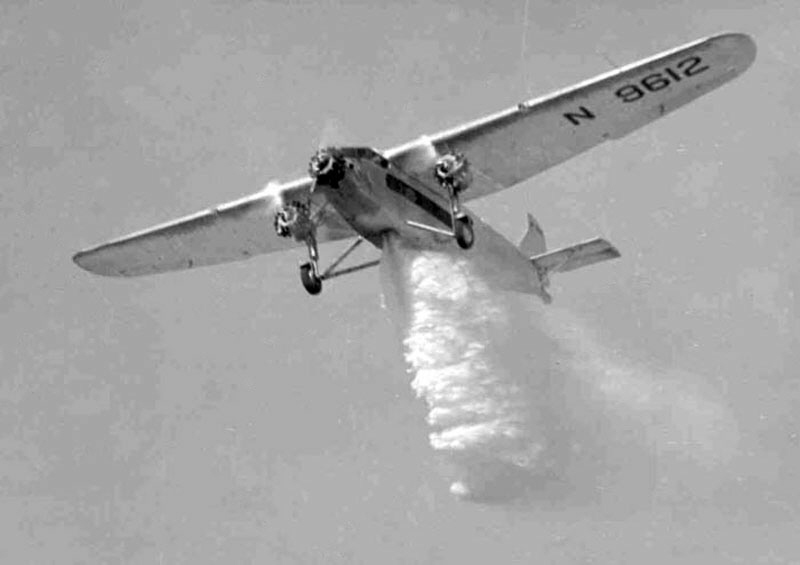 The Ford Trimotor was later brought back to the mainland where it was used to fight fire in the northwest.  Among NC9612’s accolades was that it served as the first aircraft used in water bombing to fight forest fires when Bill Hadden of Missoula, Mt. fitted it with a 300 gallon water tank. The Ford went on to drop smoke jumpers for Johnson Flying Service. During the formation flight that evening, the Ford was flown by Kelly Mahon. Kelly was accompanied by his wife Raina who is also a pilot, and Mid America Flight Museum’s Billy Packard. 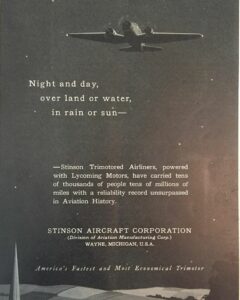 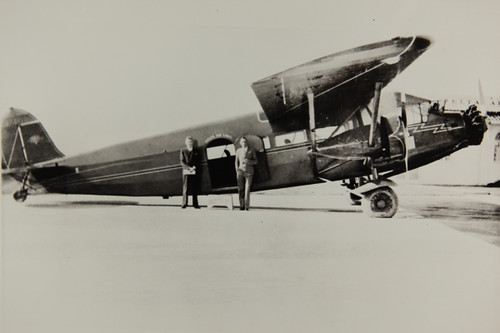 The Stinson SM-6000-B when in service with American Airways.

Next in the formation was the museum’s Stinson Model SM-6000-B,  (NC11153) a high wing Trimotor, powered by three Lycoming radial engines, built in 1931.  Restored to its former glory, this aircraft was originally purchased by Century Airlines, that soon afterward, was merged into American Airlines. Today, it is the oldest flying example of an American Airlines aircraft. After its service with American, it went on to have an extensive career in the agricultural field and at one point had been re-skinned in aluminum and fitted with constant speed props during the 1950s, Today however, NC11153 can be seen looking almost exactly as it looked when it hauled passengers about the Chicago and Cleveland areas. There is only one other example of a Stinson SM-6000-B, which is currently owned by Kermit Weeks of Florida. Flying the B Model Stinson that evening was Andrew Kiest who was joined by his fiancee, Erin Durant. 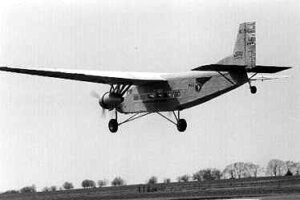 The Johnny Come Lately of the three Trimotors formed up that day, was the Stout Bushmaster 2000 Trimotor. Its slow build was completed in 1966 (1953-1966) and it was the first of only two Bushmasters that were ever manufactured. A renaissance effort to recreate a modern equivalent of his original designs of the old Ford Trimotors, Bill Stout obtained permission from Ford, then the holder of the design of the aircraft, to begin production of the Bushmaster. There were significant differences between the Bushmaster 2000 and its Ford predecessors. Its more modern and powerful Pratt and Whitney  radial engines were fitted with constant speed propellers and the old external flight control cables and outboard engine instruments, were relocated inside. On the Bushmaster, the rather weak and notoriously unwieldy brake system of the early Ford Trimotors, had been replaced with much better performing braking system. This modification made the Bushmaster much easier to taxi than the early Fords.

The Bushmaster was built in hopes of creating a successful bush plane (Commuter) to move people and freight in and around Alaska and the northwest however; it did not prove economically competitive with contemporary aircraft of the day. Production of the Bushmaster stalled after only the first had been built.  Completion of the second Bushmaster was not finished until 1984. Unfortunately the second and last Bushmaster was destroyed in 2004, when it crashed. Without passengers, the crew of two managed to survive. It was later learned that the crash was the result of an oversight by the pilot to make sure the rudder (gust) locks were removed prior to take off and the unfortunate incident was in no way attributed to the integrity of the aircraft itself.

For our formation flight that day, the Bushmaster (Serial Number 1) was piloted by Reno Air Racer Matt Jackson. With Jackson for the flight, was MAFM’s Brian Miklos. Having the likes of Miklos and Billy Packard (in the Ford) along is like having a super flight engineer with you. It is those guys and a few others, who keep the fleet flying. It was them who tuned the engines so they purr like a kitten. Well, maybe like a tiger. 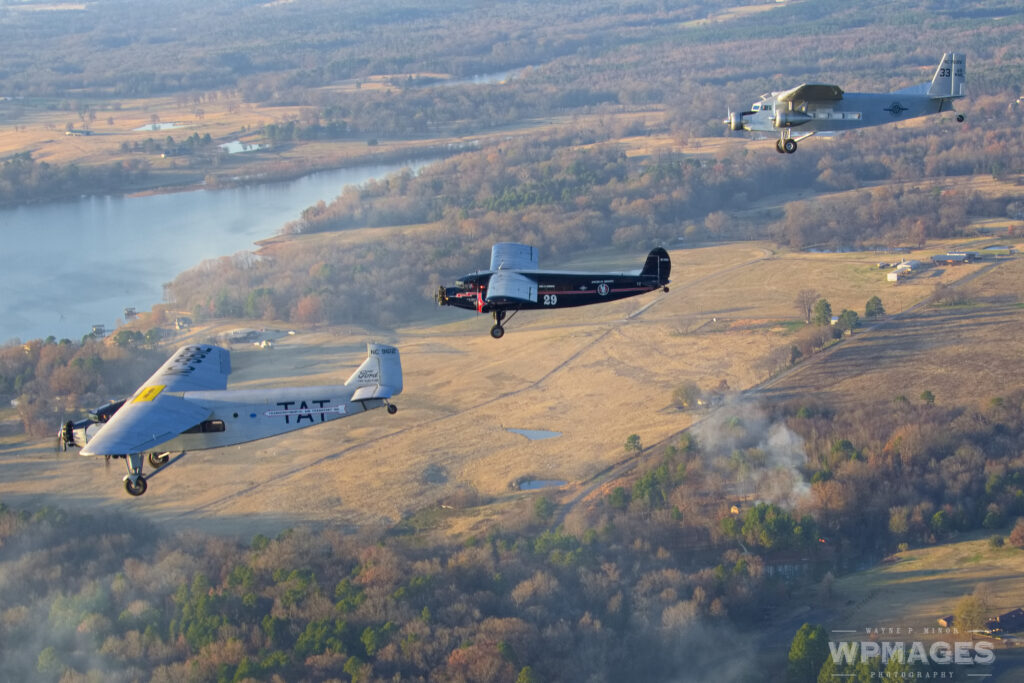 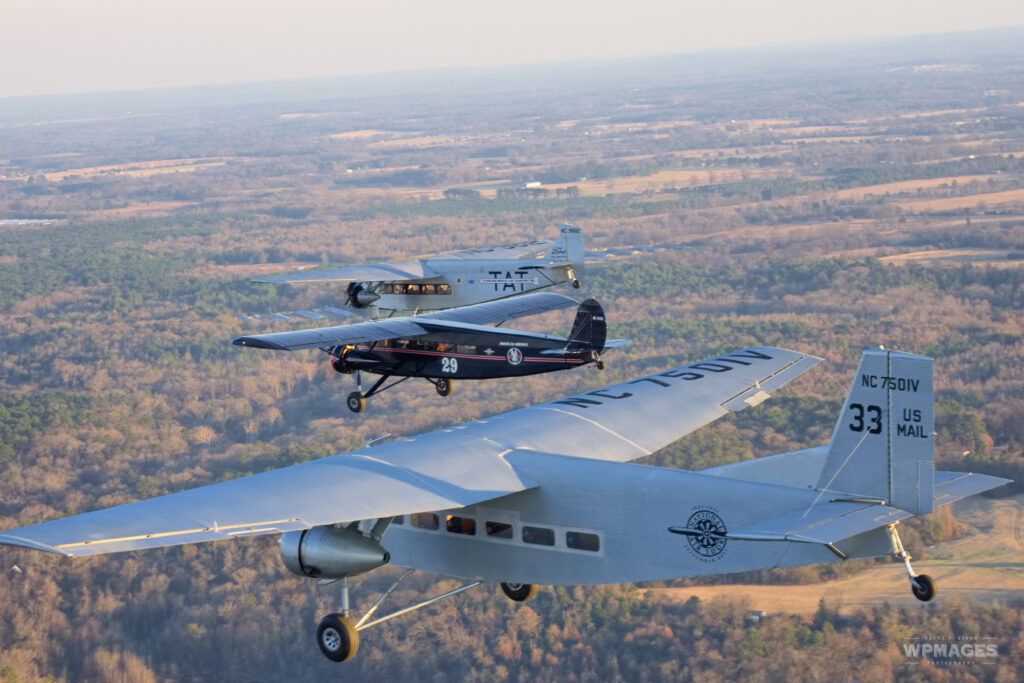 The significance of the moment wasn’t lost on any of us, regardless of our experience.  There are times in life such as standing on the top of Mount Everest I suppose, when it soaks in, that the thing you are experiencing is not happening anywhere else in the world, especially at that moment.  As aviation enthusiast, experiencing this rare and unique formation firsthand was exhilarating, would be an understatement. Article by Wayne Minor. 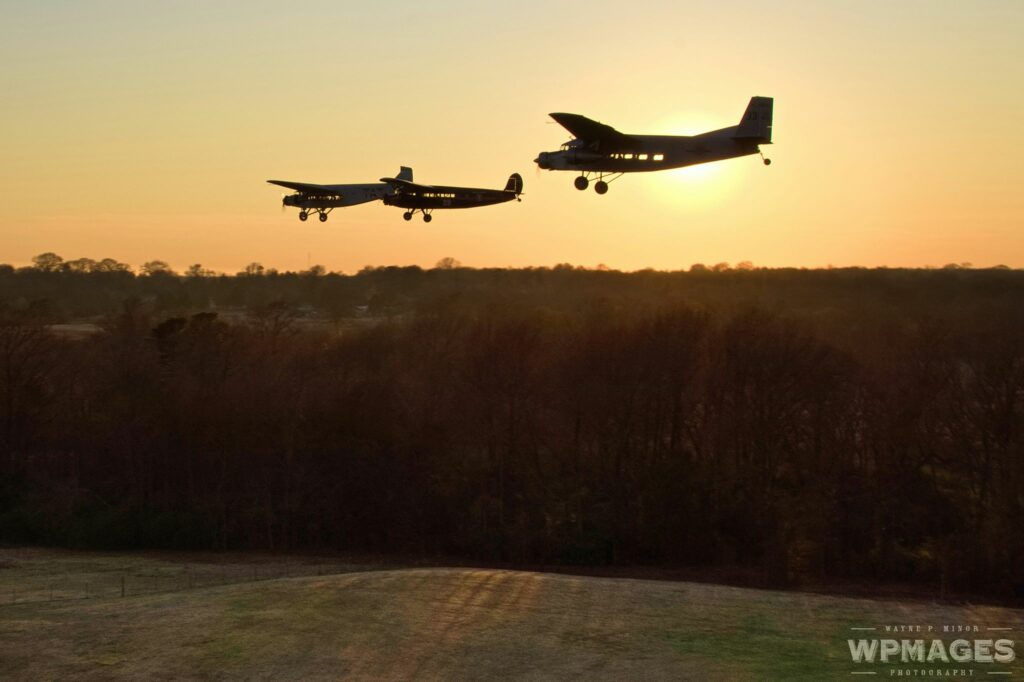 Older photos of NC9612, NC11153  are from multiple internet resources, none of which, credits the unknown photographers.