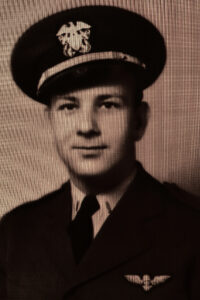 It’s doubtful that a young man born and raised in Malvern, Arkansas, would one day expect to find himself flying 14 and 16 hour missions across the vastness of the South Pacific Ocean. At a little over 300 miles from the Gulf of Mexico, the nearest body of saltwater, it would have been difficult for young Charlie A. Cash to foresee his future. In his future would be flying a complex four engine seaplane across thousands of miles of nothing but ocean, with faith that his team effort with the crew’s navigator would accurately lead them to a small group of islands known as Hawaii.

If this would have impressed him, his later future of navigating across the same amount of the Pacific to locate an island measuring only 6,300 feet in length and 750 feet in width (Ebeye Island) and at night, would have astonished him. When several volunteers from the Mid America Flight Museum considered the basic feats of navigation carried out by WWII pilots, one joked about how the tops of clouds below could easily be mistaken for the island a pilot was in search of. One responded “There is a whole lot of ‘aint’” down there when you are looking for a particular island” alluding to places where the intended destination wasn’t located. Carrying out feats like this though, was exactly the direction life would soon be taking the young Arkansan Charlie Cash.

Ever the intellectual with strong Christian Values, Charlie Cash was accepted into George Washington University. It was during that period of his life when the Japanese attacked Pearl Harbor on December 7th, 1941. Charlie ultimately enlisted into the U.S. Naval Reserve. Due to his several accolades, a good education, and a wholesome background, Charlie was accepted into the U.S. Naval Aviation Academy to become an officer. He took his oath on October 14th, 1942 as he stepped into a future far removed from his youth in rural Malvern, Arkansas.

Charlie received his initial pilot training through the Civilian Pilot Training Program from May through July of 1943 where he received basic flight training from civilian instructors in J3-Cub. Through this program he accumulated a modest 23 hours dual and 14 hours solo flight training.

December of 1943 found Charlie at the Corpus Christi Naval Air Station where he received Advanced Flight Training in both the U.S. Navy’s North American SNJ and the SNV-1 Vultee trainers. As WWII progressed, by November of 1944, Charlie was transferred to Shawnee, Oklahoma Naval Air Station where he logged extensive training in SNJs Training for Instrument and Night Instrument flying. By Mid February of 1944, Charlie had logged 93 flights with 47 hours of dual and 66 hours of solo training. 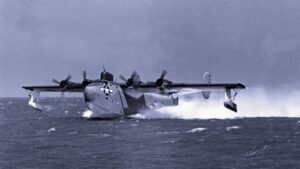 Where Charlie received his multi-engine training is unknown but he first logged training in the huge Consolidated PB2Y, a four engine seaplane in December of 1944. A far cry from the short hops around the patch in the J-3 Cub, Charlie was soon flying missions in excess of 15 hours or more often over a very dark ocean. With a huge cargo capacity for a seaplane, the PB2Y would regularly transport 28 passengers in addition to the crew that normally numbered four. Charlie also logged time in the PB2Y-H which was fitted with up to 24 litters to perform medical transports. Most of Charlie’s flights were noted in character as “Transport Missions” however there were also numerous ferry flights and even a few (Z) coded missions, which was a catch all for “Special Missions.” Such missions could have ranged from the mundane to top secret. Charlie would log a significant number of flights hop scotching between Honolulu, Ebeye Island, and Saipan, where he was based a good bit of his time in the South Pacific. 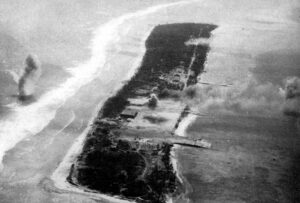 Ebeye Island formerly a Japanese Sea Plane Base was overtaken by U.S. Forces and converted for use as a U.S. Naval Seaplane Base in early 1944. 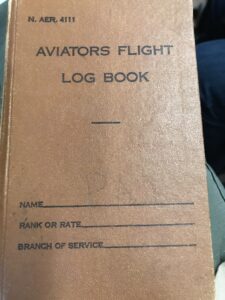 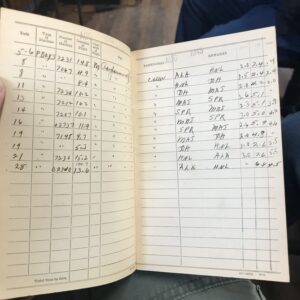 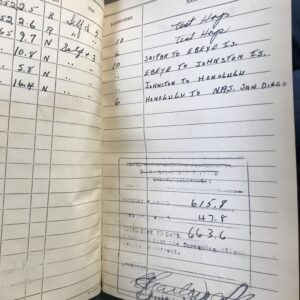 Of an interesting side note, on August 5-6, 1945, Charlie logged a 14.8 hour flight from Alameda Naval Air Station to Honolulu. August 6th, either coincidentally or incidentally, was the date the Atomic Bomb was dropped on Hiroshima, Japan. Alameda was only a short drive from the birthplace of the Atomic Bomb. 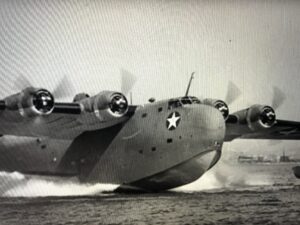 PB2Y Taking Off. The Hull of the PB2Y was significantly deeper than that of the twin Engine PBY.

For the Month of October, 1945, Lt. Charlie Cash logged a total of 96 hours flight time bringing his total military flight hours to over one thousand hours and with it, an honorable end to his military flying career. His log book last stamped and certified by the commander of U.S. Naval Air Transport Squadron Two, Alameda, California. Not uncommon for the era, Lt. Charlie Cash returned to civilian life to never again take up flying or putting his extraordinary piloting skills to use.

He reconnected with a fellow serviceman whom he had met in the South Pacific and together, per a prearranged plan, they established a shoe store in Charlie’s home town of Malvern, Arkansas. With the needs of two growing families outgrowing the returns from the shoe store, in 1950, Charlie took a position with the New York Life Insurance Company where he would remain for 35 years, retiring as Vice President of New York Life.

We at Mid America Flight Museum would not have gotten to know Lt. Charlie Cash had it not been for his daughter’s interest in the seaplanes of World War II. Having become aware that MAFM had in its fleet, a WWII PBY Catalina, Charlie’s daughter, Elizabeth (Libby) Maus and her Husband Steve Maus visited the museum the day after Valentine’s Day. We had met Steve the previous year but this was Libby’s first visit. Libby said she had attended several air shows etc but had not ever gotten to see a real deal WWII seaplane in person. While her father Charlie flew the larger four engine version, this was probably as up close and personal as Libby would get to encounter something so close to the WWII aircraft her father flew so many long missions in during the War. 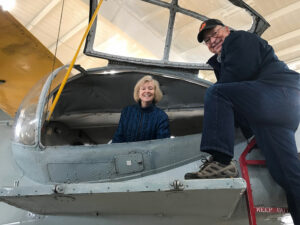 Upon learning of Libby’s connection to seaplanes and of her father, we opened up the MAFM Catalina and took her and Steve aboard. Steve and I remained behind as Libby passed through the several bulkheads of the Catalina, giving her time to soak in the history.
When we told Libby and Steve that we would like to know more about her father, she and Steve graciously allowed us to inspect Charlie’s Civilian Pilot Training and his WWII Pilot’s Log book. While they can’t come close to documenting the great life that was led by Charlie Cash, the two log books did provide a small window into the deeds of a young American Patriot during the most momentous of struggles for our country.

A lot has been written about the exploits of WWII fighter pilots and Bomber Pilots however, none of those missions would have ever occurred were it not for land and sea transport pilots like Lt. Charlie A. Cash. Our country owes Charlie and other veterans like him, a debt that we could never truly repay. As small payment, Mid America Flight Museum tries to express gratitude to Heroes like Lt. Charlie Cash. 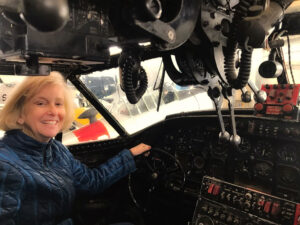 LIbby Maus seated in the MAFM .

Mid America Flight Museum would like to take a moment to salute Lt. Charles A. Cash, born August 3rd, 1922 and who died April 19th, 2008. To him and those like him, we are eternally grateful.