A Fairwell to Jim Leavelle, by Wayne Minor,

We are saddened to hear of the passing of Retired Police Detective Jim Leavelle, of the Dallas Police Department. It was in August of 2016 when Jim and David Payne dropped in on us at Mid America Flight Museum. Frankie Glover and I received word of his visit with about an hour notice. My fellow Titus County Sheriff’s Deputies Ryan McKinney, Rendy Barrett, and I, got approval to act as an ad hock greeting committee on behalf of the Titus County Sheriff’s Office.

A native of Red River County, Jim was one of the closest witnesses to many of the tumultuous events that occurred in Dallas in November of 1963. Jim, then a Dallas Police Detective wearing the iconic light colored suit and Stetson hat, was handcuffed to Lee Harvey Oswald at the moment, Jack Ruby murdered Oswald. Due to this, Jim became quite well known and was often invited to publically speak of the events from that time.

Jim was lesser known however; for his role as a young U.S. Navy seaman, who was aboard the U.S.S. Whitney, at anchor at Pearl Harbor when Japanese bombed the naval installation. When the bombing commenced, Jim was injured from the force of a bomb or torpedo blast as he descended a ladder and was knocked around.

We visited with Jim under a wing of the Mid America Flight Museum’s Ford Trimotor NC9612 which was present on Oahu at the time of the attack. The Trimotor was part of George Knox and Bob Tyce’s fleet for KT Flying Services. Bob Tyce, who operated a flight school on the island, had several students who were military servicemen up in small aircraft as part of their training that morning. Several were shot down and technically became some of the first military casualties of the attack on Pearl Harbor. Bob Tyce managed to land with his student but was killed by Japanese strafing as he walked across the airfield toward the hangar, where he died in his wife’s arms, who was a nurse.

Jim recounted some of the monumental events from Dallas 1963 and sheepishly told of having to interview a stripper believed to have overheard someone popping off about the murders, then being investigated by several agencies. He said he told her he could return when she was fully dressed and she told him, it was all coming off in a few minutes anyway, so he conducted the interview in her present condition.

When we learned of his imminent arrival to the museum, we were able to get Ned Rice to print up a metal banner for him, welcoming him to Mid America Flight Museum. It was a warm welcome and we think Jim felt how much we all appreciated him visiting with us. I recall thinking, while most folks were interested in his story of events surrounding the assassination of President John F. Kennedy, I was most intrigued to speak to a veteran who had survived the horrendous attack on Pearl Harbor, an event that propelled the nation into all out world warfare for the next several years. The attack on Pearl Harbor was a preface to events that so profoundly changed the world from the Pre-War Era, to the Post-War Era. 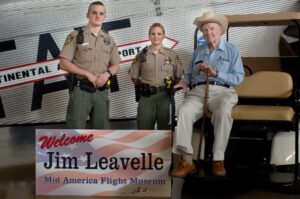 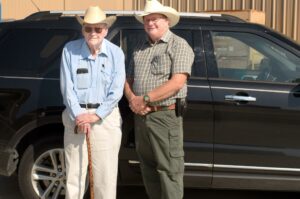 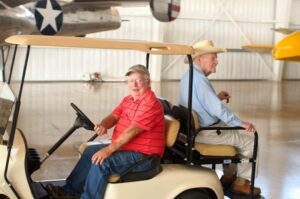 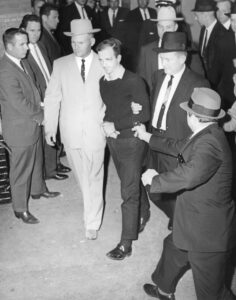 Jim and Oswald Moments Before Shooting 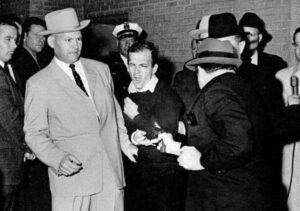 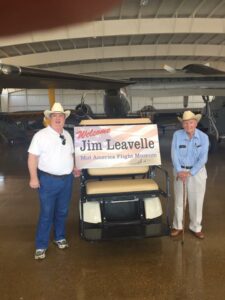